Fatal H1N1 Influenza A (2009) Infection: Stroll Down the Memory Lane

A 24-year-old primigravida presented with fever for 4 days, diarrhea, and cough with shortness of breath for 2 days. Fever was intermittent and associated with chills and rigor. Diarrhea was watery in consistency with a frequency of 3–5 stools/day. Shortness of breath progressed gradually. There was a past history of fever associated with sore throat and arthritis at 15 years of age. However, there was no history of heart disease nor was she was taking any regular medications or penicillin prophylaxis. One week before admission, she had contact with her nephew who had a flu-like illness. Her nephew recovered in a couple of days with local medication.

She was conscious, oriented but had a toxic look. She was afebrile, had tachycardia with a pulse rate of 125/minutes, which was regular, and there was no brachiofemoral delay. Her blood pressure was 110/60 mm Hg in the right arm supine position. She was in respiratory failure with tachypnea and a respiratory rate of 32/minutes with accessory muscle use and central cyanosis. She was pale and one of the residents had noticed raised jugular venous pressure (JVP) but no definite waveforms were appreciated. On respiratory system examination, she had bilateral extensive crepitations and bronchial breath sounds in the right mammary/axillary/infra-axillary/infra- and interscapular areas. On cardiovascular examination, her S1/S2 was audible. The apex was localized to the 6th intercostal space and a mid-diastolic murmur was appreciated at the apex. Central nervous system (CNS) examination was normal. The gravid uterus was felt on the abdomen palpation. No organomegaly was noted.

This 24-year-old pregnant woman (18 weeks) presented to a medical emergency with a short febrile illness followed by progressive dyspnea of recent onset, associated with a mild cough and streaky hemoptysis. She was hypoxic at admission, which was corrected with high flow oxygen; soon requiring noninvasive ventilation, later assisted mechanical ventilation. With a high possibility of an H1N1 2009 infection, she was given a double dose (150 mg BD) of oseltamivir (Tamiflu). Echocardiography confirmed the diagnosis of mitral stenosis and she initially received decongestive therapy in the form of diuretics and nitroglycerine (NTG) infusion. Intravenous (IV) antimicrobials (ceftriaxone and azithromycin) were given on day 1 of admission, which was later, changed to piperacillin–tazobactam and vancomycin on day 3 of admission. On day 2, she suffered an episode of bradycardia with hypotension, revived after atropine, and chest compressions. Following this event, she received central venous pressure (CVP)-guided fluids, multiple inotropes, and hydrocortisone for refractory hypotension. Preterminally, acute right upper limb ischemia was noticed in the form of absent pulses. Her renal functions rapidly declined but renal replacement (RRT) could not be given. On day 4 of hospital stay, she suffered a cardiorespiratory arrest from which she could not be revived.

This is a 24-year-old pregnant woman with a suspected past history of acute rheumatic fever presenting with fever, diarrhea, and acute onset respiratory distress. The fever was initially mild which persisted with a rising trend and had leukocytopenia suggesting a viral origin. She also had a contact history. On investigation, there were extensive nodular opacities in the lungs with positive RT-PCR for H1N1 (2009) indicting acute respiratory distress syndrome (ARDS) due to influenza. The causes of ARDS in pregnancy can be multifactorial and can be classified based on its relation to pregnancy (Table 3).1–3 Leading cause of acute respiratory distress in pregnancy was an infection, followed by preeclampsia and aspiration.3 Pregnant women are at increased risk of morbidity and mortality during the H1N1 pandemic during 2009 both in India and globally.4–6 Role of pregnancy in respiratory illness has been attributed to altered pulmonary mechanics and suppressed cell and humoral immunity.7 This patient had a contact with cousin with a similar illness. The household secondary attack rate of H1N1 2009 was estimated to be about 27.3%.8 There is a possibility of bacterial/fungal coinfection in this patient as there was multifocal consolidation, and high-grade fever. Multiple autopsy series provide evidence for such association.7 Common viral etiological agents include influenza A, influenza B, and varicella-zoster virus while common bacterial agents are Streptococcus pneumoniae, Haemophilus influenzae, Mycoplasma pneumoniae, etc.9 A public health surveillance study reported a case fatality rate of 22 (9–56) deaths per 100,000 and two-thirds had a severe systemic disease or incapacitating systemic illness.10 In addition to pregnancy, this patient had an increased risk of pneumonia due to underlying rheumatic mitral valve disease.8,11 Additional high-risk factors associated in this case are coinfection (bacterial/fungal), non-vaccination, and admission into intensive care.9 Terminal complications included anemia, thrombocytopenia, and hypotension probably due to associated disseminated intravascular coagulation, infection-related hemophagocytosis, and septic shock.

Both the lungs together weighed 1,600 g. They were heavy, airless, and subcrepitant to feel. Pleurae were dull and showed subpleural hemorrhages. On the cut surface, both the lungs showed diffuse hemorrhagic consolidation with obliteration of the lung markings giving a homogeneous appearance. Focal nodular hemorrhagic lesions were palpable. Main pulmonary vessels were within normal limits, no thrombi were seen on gross. 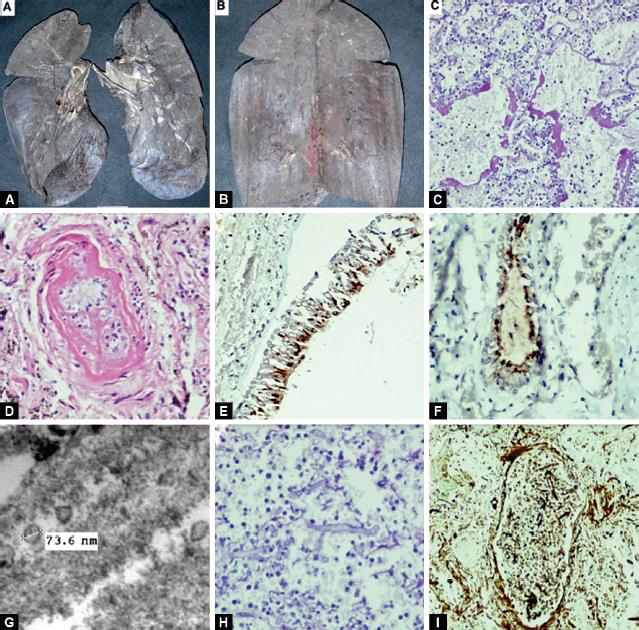 Figs 1A to I: (A) Both the lungs were heavy; (B) The cut surface shows hemorrhagic nodular opacity; (C) PAS-positive hyaline membrane deposition in alveolar ducts; (D) Fibrin thrombi with endothelial injury; (E and F) H1N1 antibody positive in the columnar epithelium and distal bronchi (DAB; 40×); (G) Viral particles ranging in size from 74 to 82 nm in diameter with spikes of surface glycoproteins on the outer surface, characteristics of the influenza virus; (H) Broad, pauci-septate hyphae of zygomycosis; (I) Grocott’s Methenamine Silver stain highlighting angioinvasive fungal profiles

A microscopic examination from the representative section showed the desquamation of bronchial lining with a moderate lymphomononuclear infiltrate in the wall and submucosal glands along with congestion. Lung parenchyma showed widespread fibrin deposition lining the alveolar ducts and spaces leading to the formation of a hyaline membrane. There was interstitial edema, congested capillaries, and mild lymphomononuclear cell infiltrate. Interstitial small and medium blood vessels showed fibrin thrombi with injury to lining endothelial cells indicating microangiopathy. There was a shedding of bronchiolar lining with similar hyaline material lining the bronchiolar wall indicating fibrinous bronchiolitis. Sections from the nodular consolidated area show alveolar hemorrhage with many broad, pauci-septate, angioinvasive fungal hyphae with morphological features of zygomycosis.

Viral particles were observed. Each viral particle ranged in size from 74 to 82 nm in diameter. In some particles, the spikes of surface glycoproteins on the outer surface, characteristics of the influenza virus were seen. Real-time PCR for H1N1 was positive in the lung, while negative in the heart, liver, and placenta.

The heart weighed 400 g. Epicardial hemorrhages were seen. The left atrium was dilated and the mitral valve ring diameter was reduced. The mitral leaflets were diffusely thickened with commissural fusion and shortened and thickened chordae tendineae. Aortic valve cusps were also thickened with commissural fusion. There was dilatation of the root of the aorta. Tricuspid and pulmonary valves were within normal limits. Left ventricular wall thickness was 1.5 cm and right ventricular wall thickness was 0.4 cm. The microscopic section from the mitral valve and aortic valve leaflet showed dense fibrocollagenous tissue with prominent thick-walled blood vessels and focal inflammatory cell infiltrate comprising of lymphocytes and histiocytes indicating chronic valvulitis. 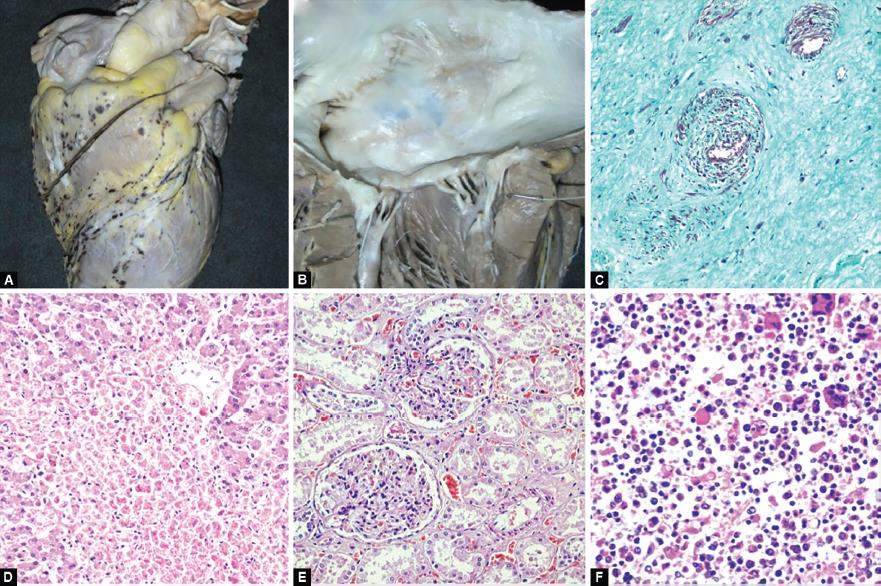 The pancreas was grossly and microscopically unremarkable.

This case demonstrates clinical, pathological, and virological findings in a fatal H1N1 infection. The target group to develop severe disease includes people with a prior lack of exposure to illness, obesity, pregnancy, and cardiovascular diseases. There are no definitive explanations for increased risk of viral pneumonia in pregnancy and patients with heart disease. The plausible hypothesis includes pulmonary hypertension in cardiac diseases and increased blood volume in pregnancy predisposing to alveolar edema and septal damage by the virus.

The histological findings of acute alveolar injury in the form of diffuse alveolar damage caused to be seen in many other viral infections including coronavirus and other agents that are injurious to alveoli. The alveoli and alveolar ducts are lined by hyaline membranes, consisting of fibrin mixed with remnants of necrotic epithelial cells. Fibrin thrombi were present in the capillaries of alveolar septa and alveolar ducts, as well as in small pulmonary blood vessels. Immunohistochemistry demonstrated a higher viral load in the ciliated columnar epithelium of proximal airway than the alveolar cells and pneumocytes, which was further confirmed with the ultrastructural examination. The damage to distal lung parenchyma and other organs was cytokine-mediated end-organ damage rather than a direct viral cytopathic effect. This distribution of viral load is well known in the existing literature.7,12 Various autopsy series have described secondary bacterial, viral, and/or fungal coinfection in influenza A H1N1 infection depending on the host environment.10,13 This case demonstrated the coinfection of angioinvasive zygomycosis. Another interesting finding is the lack of transplacental spread of the virus. Reverse transcriptase polymerase chain reaction (rRT-PCR) performed in the placenta, fetal liver, and heart was negative.

Taking note of the ongoing COVID-19 pandemic, this case demonstrates another fatal pandemic viral infection with many similar histomorphological features.