Peripheral limb gangrene in neonates presenting soon after birth is rare and exact etiology could not be ascertained in majority. In order to make an important contribution to the limited literature on this topic, we report rare and unique presentation of peripheral limb gangrene in two neonates soon after birth (on day 1 of life) involving lower limbs. The etiology could not be ascertained, despite extensive workup. Both cases were managed with supportive care and low-molecular-weight heparin and developed auto-amputation of toes.

Peripheral limb gangrene in neonates is rare entity, and various predisposing factors implicated include prematurity, dehydration, sepsis, umbilical artery cannulation, hypercoagulable state, pregnancy-induced hypertension, and maternal diabetes.1–4 The exact etiology of peripheral limb ischemia and gangrene in neonates presenting at or soon after birth is unknown in majority of reported cases.1,5 Possible causes postulated are distal arterial occlusion by emboli from placenta, ductus arteriosus, or umbilical arteries; birth trauma, polycythemia, arterial spasm, external compression of limbs between fetal skull and maternal pelvis; and constriction band or constriction by umbilical cord leading to microcirculatory insufficiency.1,2,5 The simultaneous presence of number of these causative factors may be required to develop peripheral gangrene, and this may explain the rarity of this condition.5 There are only few case reports of peripheral limb gangrene in neonates presenting soon after birth.1–3,5–10 We report two neonates who presented with peripheral limb gangrene soon after birth, etiology of which was not obvious despite extensive workup and both developed auto-amputation of toes.

A term, 2700 g female baby born by vaginal delivery with normal perinatal transition presented with complaints of bluish–black discoloration of left foot noted soon after birth. Examination revealed tachypnea, palpable femoral and dorsalis pedis arteries, gangrene involving all the toes and lateral border of left foot (Fig. 1A), and normal systemic examination. Investigations are shown in Table 1. She was started on intravenous antibiotics, subcutaneous low-molecular-weight heparin (LMWH, enoxaparin) 2 mg/kg/day, and daily wound dressing. There was no further progression of the lesions, and baby was discharged after 14 days. At follow-up after 1 month, there was auto-amputation of all toes of left foot (Fig. 1B). The LMWH was stopped, and she was planned to undergo protein C and S and antithrombin III estimation in follow-up.

A term, 3500 g male baby delivered by vaginal delivery with normal perinatal transition, presented on day 1 with a small erythematous lesion over toes of both lower limb that progressed over time into a bullous lesion and later turned blackish and progressed up to knees. Examination revealed gangrene involving all toes and lateral aspect of ankle of left foot (Fig. 2A), right foot, and leg up to knee joint (medially) (Fig. 2B) as well as left thigh and left scrotum. Bilateral femoral, popliteal, and dorsalis pedis arteries were palpable, and systemic examination was normal. Investigations are mentioned in Table 1. He was started on broad-spectrum antibiotics and subcutaneous LMWH. There was no progression of the lesions and subsequently was discharged after 11 days. In follow-up after 2 months, there was auto-amputation of all toes of left foot and (Fig. 2C) scar mark over right foot and leg medially (Fig. 2D). The LMWH was given for 3 months. 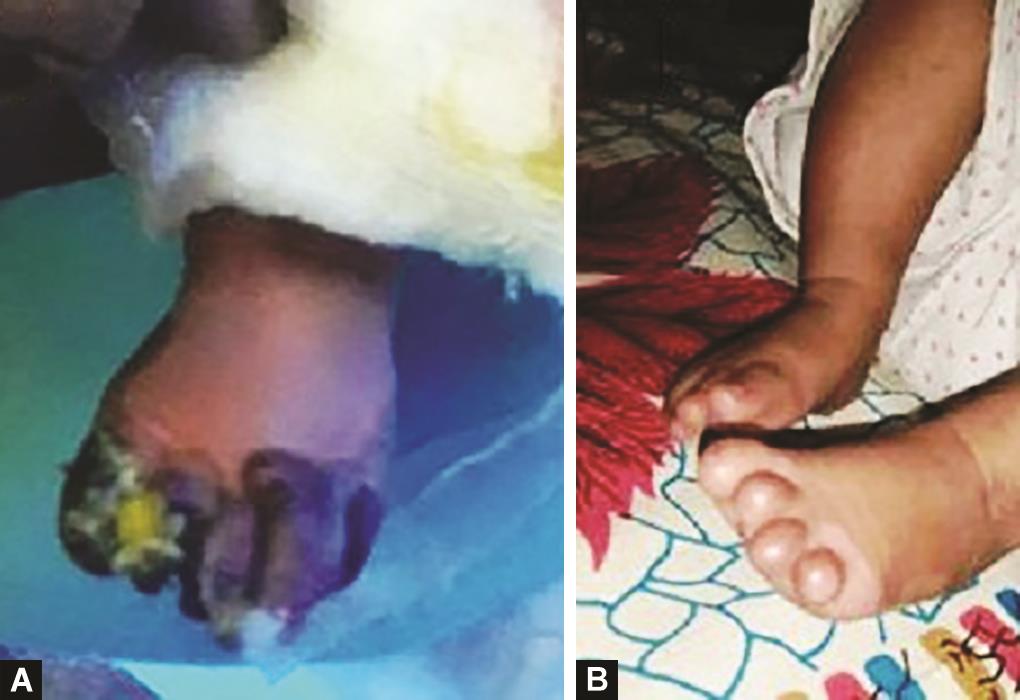 Figs 1A and B: (A) Gangrene involving all toes and lateral aspect of left foot; (B) Auto-amputation of all toes of left foot in follow-up

Peripheral limb gangrene in neonates is extremely rare.1,5 Basic pathology for gangrene involving extremities is diminished perfusion. We postulated that the possible causes of peripheral gangrene in index cases could be arterial occlusion by emboli from placenta, ductus arteriosus, or umbilical arteries; arterial spasm; or external compression of limbs during birth based on two facts,1,2,5 leading to microcirculatory insufficiency. First, index cases had absence of any maternal risk factors, prematurity, perinatal adverse event, sepsis, polycythemia, dehydration, pro-coagulant state, and cardiac disease. Second, the gangrene developed soon after birth (pointing toward an etiology related to ante- or intrapartum events). 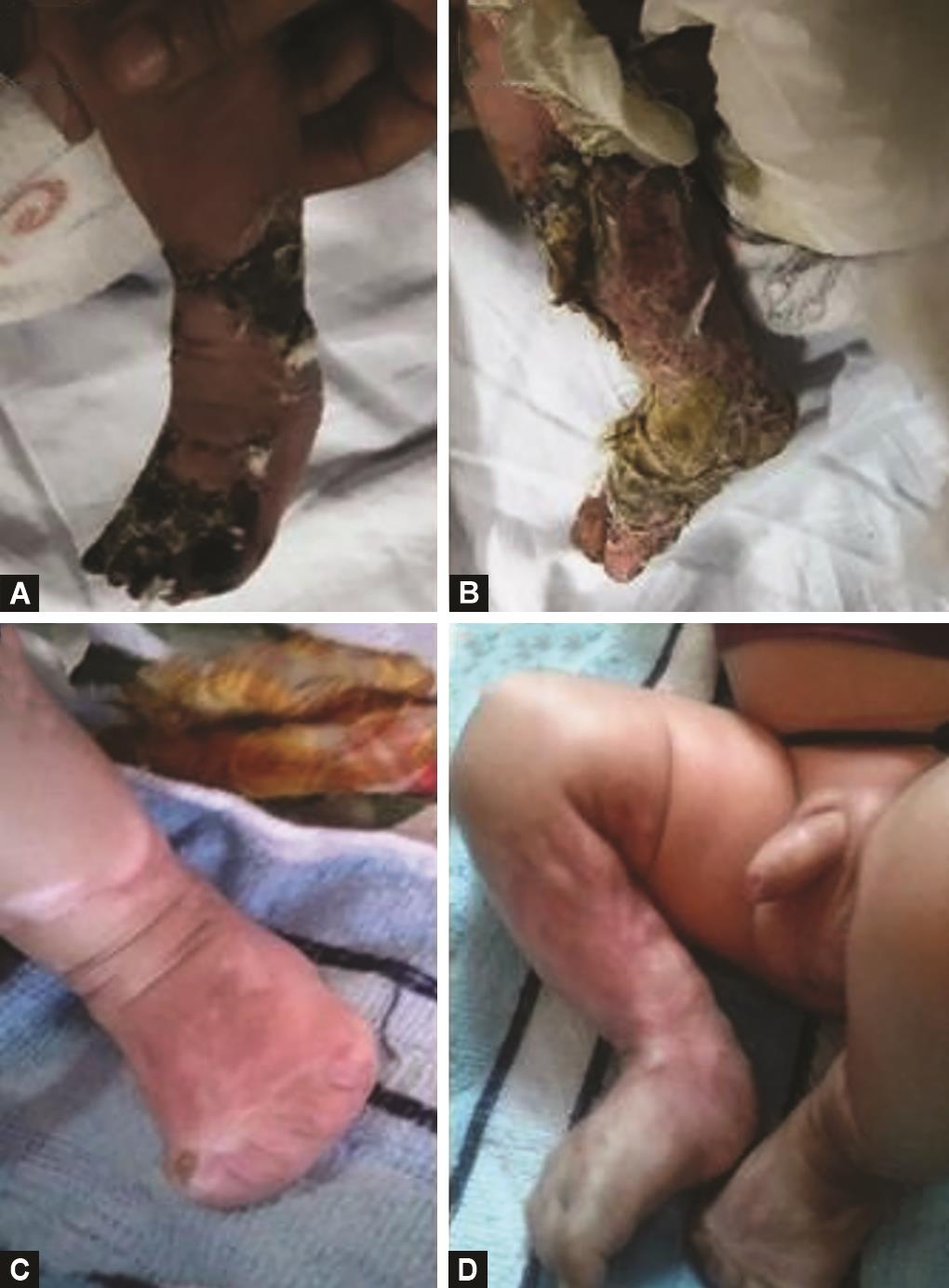 Review of literature also suggests that in majority of neonates with peripheral gangrene, the etiology could not be ascertained.1,5 Turnpenny et al.1 published a review involving 56 neonates (reported till 1992) who presented with peripheral ischemia and gangrene at or soon after birth. Authors could not find any etiology in majority. Kothari et al.9 reported 4 neonates with bilateral lower limb gangrene who required amputation. Two neonates had undergone exchange transfusion, and in two no etiology could be identified. Nagai et al.10 reported two neonates with intrauterine gangrene of bilateral lower limb complicated by prematurity and twin-to-twin transfusion syndrome requiring below-knee amputation. Neonates in index report presented soon after birth with peripheral gangrene without any identifiable cause and had auto-amputation of toes. Ahluwalia et al.11 from our center reported prothrombotic profile of 11 children (age range of 1 month to 17 years) with peripheral gangrene and noted protein S deficiency and transient positivity for lupus anticoagulant in only one patient each. The authors indicated that in children with peripheral gangrene, the deficiency of protein C, protein S, antithrombin, anticardiolipin antibodies, lupus anticoagulant, and factor V Leiden positivity is uncommon as causative factors.

The management of neonatal peripheral limb gangrene is conservative with antibiotics and local wound care to prevent secondary infection; heparin to decrease progression of thrombosis, if present; and early surgical intervention in the presence of severe or progressive ischemic changes. Care should be taken to avoid amputation prematurely till definitive demarcation line between healthy and gangrenous area develops. Amputation should be designed to preserve growth plate and to ensure adequate stump for prosthetic fitting in future. Often there is spontaneous progression to sloughing and auto-amputation6 as in index cases.

The limitation of index report is lack of definitive etiology for the development of peripheral limb gangrene in these neonates. This is similar to the findings reported by other authors, where the etiology could not be ascertained in majority of neonates and children with peripheral gangrene.1,5,8,9,11

Peripheral limb ischemia and gangrene presenting at or soon after birth is a rare condition. The etiology could to be ascertained in majority of the neonates. Management include supportive care and LMWH. Auto-amputation occurs in majority of the cases, and meticulous supportive treatment could decrease the loss of function of affected limb.