Vascular Endothelial Growth Factor as a Marker of Tissue Healing Response in Mangled Extremity: Preliminary Data from an Observational Study

Purpose: The postoperative complication rate in mangled extremities is substantially high, irrespective of the nature of surgery performed. We attempted to identify the role of tissue vascular endothelial growth factor (VEGF) as a marker of neovascularization in skeletal muscle postinjury and its prognostic significance if any.

Materials and methods: A pilot study, including 30 patients, was conducted at an advanced trauma center in PGIMER, Chandigarh in 2016. Patients were divided into 2 groups, based on the mangled extremity severity score, each containing 15 patients. Group I patients with a score of ≥7 were planned for amputation, whereas group II patients with a score of <7 were planned for limb salvage. Intra-op, skeletal muscle biopsies were taken in group I patients from three different zones. Zone A was the mangled zone; zone C was the clinically healthy zone, and zone B was the intermediate zone. Whereas, in group II, muscle samples were taken pre- and post-debridement. All the skeletal muscle samples were subjected to hematoxylin and eosin (H&E) stain followed by immunohistochemistry (IHC) examination with VEGF antibody in an attempt to identify viable muscle in various areas of the limb.

Results: On H&E stained samples, in group I patients, the percentage of viable muscle fibers increases from 6.7 to 73% from zone A to zone C, whereas it increases from 7 to 80% in group II. On IHC stained samples, the median score was 0 (showed no positive staining) in all three zones of group I with a p value >0.05; whereas in group II, the median IHC score was 0 and 1 in pre- and post-debridement samples, respectively, with a p value of 0.004.

The world has seen significant advances in the management of mangled extremities over the past few decades. Most mangled extremities are due to very high energy trauma, where high-speed motor vehicle accidents are the main culprits.1 Such injuries are often associated with high mortality rates and long-term disability, irrespective of the nature of surgery.2,3

Specific biomarkers like PAX-74 and CK-MM5 have been evaluated in mangled extremities and preliminary data are encouraging. Vascular endothelial growth factor (VEGF), a transcription factor, is one such marker that gets induced in hypoxic states and stimulates angiogenesis, thus helping in tissue repair and healing.

One of the most important cascades of tissue repair postinjury is neovascularization. It has a direct link with the outcome and prognosis of injury.6 All those patients who have good initiation of tissue repair mechanism postinjury, usually take less time in tissue healing and have better surgical outcomes. Angiogenesis is a key component of the repair mechanisms triggered by tissue injury. VEGF is one such important mediator of angiogenesis and tissue repair cascade. The existing literature has highlighted the role of VEGF as a prognostic marker in the various pathological process, such as cancer, and established it as a marker of neovascularization7-12 (Table 1). Extensive literature search so far has shown a paucity of literature on the role of VEGF in mangled extremity per se.

In the present study, we have look for VEGF expression in skeletal muscle tissue in injured limbs in different zones, to extend its utility as a prognostic marker in patients with mangled extremities.

A prospective study was conducted on 30 patients over a 1-year period who reported to our advanced trauma center with mangled extremities. Institute ethics committee clearance for the same was obtained and informed consent was taken from all patients.

Patients >18 years with mangled extremity, with no diabetes or hypertension, presenting with polytrauma, or with isolated/combined mangled were evaluated in this study. Morbidly obese patients, malnourished individuals, known cases of immunodeficiency disorder, vasculitis, or peripheral vascular disease were excluded from the study.

After initial resuscitation and stabilization, all injuries of the patient were identified and noted. Based on the MESS scoring system, the patients constituting the study population were categorized into 2 groups; group I were patients with MESS score of ≥7 and were planned for amputation while group II were patients with MESS score of <7 and were given the option of limb salvage. For this study, we arbitrarily demarcated the limb segments into three different zones (Fig. 1). Zone A was the most distal zone which corresponds to the mangled part of the limb, while zone C was a zone of apparently healthy muscle tissue above the final point of amputation. Zone B was the intermediate zone between the two with a tissue of doubtful viability; this was the actual site of amputation. Skeletal muscle samples were taken from each zone in group I intraoperatively. In group II patients, muscle samples for biopsy were taken before and after debridement. 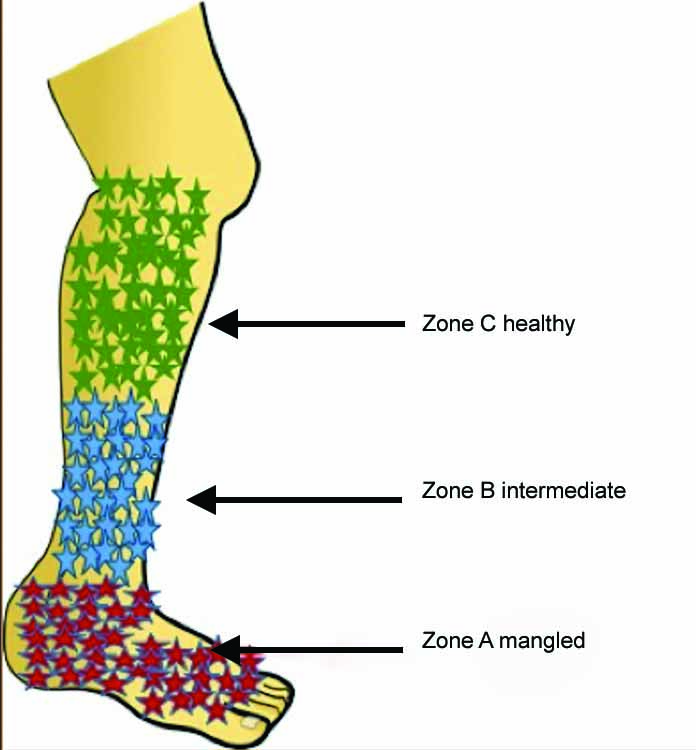 Fig. 1: Pictorial representation of injury zones in mangled limb in group I patients. The zones were demarcated arbitrarily based on clinical criteria of color, consistency, contractility, and bleeding of skeletal muscle and soft tissue

All the samples were stored in 10% buffered formalin solution in a well-labeled sterile container. All the sections were further examined under a microscope with hematoxylin and eosin (H&E) stain followed by cutting of each section into multiple 2-μm paraffin sections that were used for immunohistochemistry (IHC) stain with VEGF antibody. On H&E staining, degenerated muscle fibers with distorted morphology were identified along with the extent of infiltrating early inflammatory cells in and around the degenerated fibers. Patchy to diffuse involvement of muscle fibers with intercellular edema were noticed. Viable muscle fibers were also delineated.

A rabbit polyclonal antibody in a dilution of 1:100 was used after standardization. VEGF is a nuclear stain that will positively stain nuclei in the cytoplasm of muscle fiber. On IHC stain with VEGF antibody, positive staining of nuclei was noted and graded accordingly (Fig. 2). The following grading/scoring was used:

It is a well-known fact that, in response to any trauma, the body will initiate a tissue repair cascade, of which neovascularization is the most important step. Likewise in muscle injury, neovascularization will be initiated in relatively healthier muscle tissue. As the expression of VEGF increases in these repairing muscle tissues, it would be possible to get them stained positively with higher staining grades of VEGF.

On IHC stain with VEGF antibody, positive staining of nuclei was noted and graded accordingly (Fig. 2).

On H&E examination, sections from zone A showed diffuse necrosis in 100% of samples with infiltrating inflammatory cells predominantly neutrophils with degenerated myofibers, fragmented sarcoplasm, and significant intercellular edema. In 86.6% of sections in zone B, a moderate extent of necrosis was noted as compared to zone A and it further reduced to 40% in zone C, which was more of patchy distribution. The decreasing extent of necrosis was statistically significant between zone A and C and between zone B and C with a p value of 0.004 and 0.016, respectively. In zone A, 6.7% of samples also had viable muscle fibers which increased significantly in zone C to 73.30% (p value 0.002) with significant large no. of myofibers without evidence of necrosis and were morphologically more uniform (Table 2).

Despite the changes in the management of mangled extremities, the dilemma that remains is the choice between limb salvage and primary amputation of the limb.1 It is a well-known fact that in response to any trauma the body will initiate a tissue repair cascade, in which neovascularization is an important step. Likewise in muscle injury, neovascularization will be initiated in the relatively healthier muscle tissue, which can be potentially graded by the increased expression of VEGF, which could be quantified by higher staining scores of VEGF. There exist many indirect pieces of evidence that correlate the role of VEGF as a prognostic marker in various pathological processes like cancer, where it has been established as a marker of neovascularization7-12 (Table 3).

In our study, we have studied 30 patients who were divided into 2 groups and all the tissue sections were stained with VEGF antibodies. Since VEGF is a marker of neovascularization, it may provide an insight into the healing potential of damaged muscle tissue. In either of the group, variable expression of VEGF in skeletal muscle was noted. In group I patients, zone A representing a higher percentage of necrotic tissue, showed lower VEGF scores (0, 1) in around 94% of sections. Whereas in zone C, representing relatively healthier and viable muscle fibers had VEGF score of >1 in around 20% of sections. Likewise, in group II patients, low VEGF scores (0, 1) were noted in 80% of predebridement sections, whereas scores of >1 were noted in 46% of post-debridement sections. It is clearly evident from the study that the tissue sections from zones A and B in group I and predebridement in group II had a relatively greater percentage of unhealthy, degenerated, and necrotic muscle fibers, and therefore these zones also had relatively lower VEGF grades. On contrary, zone C in group I and post-debridement sections in group II had higher proportions of viable muscle fibers and therefore had higher VEGF scores (>1). Though the increasing VEGF expression and grades were noted in both group I (zone A to zone C) and group II (pre- to post-debridement), it was found statistically significant in group II patients only with a p value of 0.004. This discrepancy may be attributed to the relatively small sample size of the study.

The preliminary data from the study are encouraging and further strengthen the role of VEGF as a marker of neovascularization and tissue repair cascade. The variable expression in skeletal muscle in mangled extremities further signifies the variable graded response of the body in different injury zones, amounting to variable damage of skeletal muscles. Thus, the injury zones with significant viable muscle fibers initiate a stronger tissue healing response and have higher VEGF expressions. This study is a baby step and therefore advocates for large multicentric trials in the future before extrapolating the results to a large group population.

Our preliminary data indicate that there is some potential in utilizing VEGF staining scores as reflective of tissue repair cascade in traumatized limbs. However, this demands further evaluation in a larger patient population to extract the true potential of VEGF as a prognostic marker in mangled extremities.

This work has been partly funded by the Indian Council of Medical Research, Department of Health Research, New Delhi.