Diabetic ketoacidosis is a life-threatening medical emergency. Prompt diagnosis aids in guiding adequate treatment and preventing complications. Serum and urine ketones are both widely used for diagnosis. Blood ketone measurement has more sensitivity and specificity compared to urine ketones. Hence capillary blood 3β-hydroxybutyrate (OHB) being more specific, unnecessary workups of DKA can be reduced potentially in the emergency department and it also helps in identifying the patients with euglycemic DKA in resource-limited settings.

Increase in the counter-regulatory hormones like glucagon, cortisol, growth hormone, catecholamines, and simultaneous insulin deficiency will enhance the rate of lipolysis, ketogenesis causing hyperketonemia in DKA.

This elevated ketone body levels can be detected either in serum or in urine and will help in the early diagnosis and management of DKA in emergency settings.

DKA occurs in 1 in 2000 patients which is a medical emergency. It frequently occurs in type-1 diabetes mellitus but it can also occur in type-2 diabetes. The diagnostic triad of DKA includes the hyperglycemia, metabolic acidosis, and increased ketone bodies in the serum/urine.

Complications of DKA may leave irreversible damage to the vital organs apart from the higher risk of mortality (2–5%). The complications of the DKA are cerebral edema, thromboembolism, infection, shock, pulmonary edema, and electrolyte abnormalities.

Ketone measurement is advocated for diagnosing and assessing the severity of DKA. But it is challenging because multiple methods are available, and there is a lack of consensus regarding which is the preferred method.

Conventional ketone testing with the nitroprusside test is associated with multiple problems. The nitroprusside reagent detects only acetoacetate and acetone to some extent but not 3β-OHB, which is the main ketone body component in DKA.

Nitroprusside test whether it is performed in urine or blood, it fails to detect the overall improvement and can also lead to potentially dangerous increase in the insulin therapy. This is because as DKA improves with treatment, there is an increased conversion of 3β-OHB to acetoacetate and thus the acetoacetate levels will remain elevated even after the overall ketone body levels dropping down.

False positive results are also common with nitroprusside test especially in the presence of drugs like captopril, MESNA, N-acetylcysteine, dimercaprol, and penicillamine.

False negative results are also seen when nitroprusside test strips have been exposed to air for longer periods.

Studies Related to Significance of Ketone Bodies Measurement in DKA

In one study made by Bektas et al., venous and capillary blood ketones showed good correlation.

According to Arora et al., blood β-OHB more than 1.5 was superior to urine dipstick in terms of sensitivity, specificity, and positive predictive value.

As per Laffel et al.’s study, poor prognosis was associated with β-OHB levels more than three and incidence of hospitalization was lower in patients monitored by capillary β-OHB levels during their sick days.

Point-of-care devices which will measure the capillary blood ketone 3β-OHB are more reliable. In patients with 3β-OHB <0.5 mM, acidosis had resolved; but not in any of the patients with 3HB levels >1.1 mM.

Whereas nitroprusside test was positive in more than 50% of the patients for almost 24 hour even after resolving of acidosis. 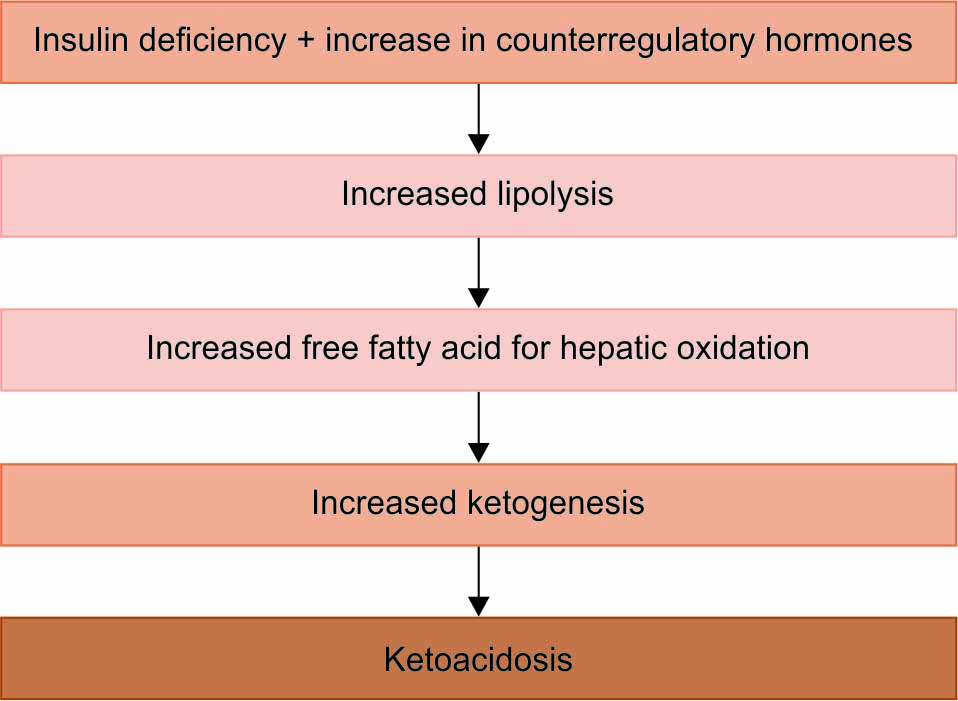 In the management of DKA, urinary ketone tests are not reliable for monitoring the recovery due to unpredictable degrees of ketone body re-absorption by the kidneys. Hence urine ketone bodies can be detected even after blood concentration returning to normal levels.

According to the UK guidelines in patients with DKA when the fluid and insulin treatment is given correctly the concentration of ketones will reduce at a rate of 0.5 mmol/L per hour.

Patients having 3β-OHB >3 mmol/L are at high risk of DKA, relevant other investigations can be done and managed accordingly. Whereas in patients with 3β-OHB <3 mmol/L the search for diagnosis can be redirected.

Pregnancy, gastroparesis, SGLT-2 inhibitors, insulin pumps can cause euglycemic DKA, and the diagnosis can easily be missed as there is no hyperglycemia which is a part of the triad used for diagnosing DKA. Hence by using capillary blood 3β-OHB the euglycemic DKA patients can be identified. This is important because the euglycemic patients also require treatment with insulin and are to be treated with 5% dextrose and normal saline initially which is not the same with routine DKA management.

Bringing awareness among the patients regarding regular monitoring of 3β-OHB during their sick days will potentially lower the hospitalization rates.

Urine ketone tests that are currently available are not reliable for diagnosing or monitoring the treatment of DKA as urine ketone bodies can be detected even after blood concentration returning to normal levels.

Blood ketone testing methods that can quantify 3β-OHB are useful as the sensitivity, specificity, and positive predictive values are more when compared with the urine ketone test methods.

Measuring the levels of 3β-OHB in capillary blood is very effective and also faster than the routine urine dipstick methods and hence it is very much useful in emergency settings.

A significant reduction in mortality and morbidity can be achieved by routine monitoring of 3β-OHB in suspected impending cases of DKA, and is of very much use especially in a resource limited rural settings.

Patients who are being treated with SGLT-2 inhibitors, the incidence of euglycemic DKA is commonly seen, and ketone meters will help in the diagnosing such cases.